The Fire Department's mission is to provide timely response for the protection of life and property from fire and to provide related services that maintain or improve the quality of life in the City of Beloit. The Fire Department also provides mutual aid to the Mitchell County Rural Fire District under a written agreement. 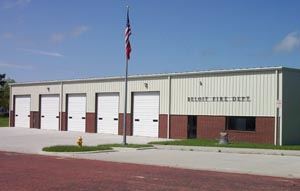 The Fire Department discharges its responsibilities with a volunteer staff of 25 fire fighters. The Fire Department operates four pieces of equipment, including three pumper trucks and an equipment truck. The Mitchell County Dispatchers dispatch the Fire Department from the Law Enforcement Center. Communications are complimented by a full pager system.

The ISO rating for the City of Beloit is Fire Insurance Class 5.

In 1999, the City of Beloit received a Community Development Block Grant (CDBG). The grant was in the amount of $343,000 and funded the construction of a fire station facility. The total estimated project costed approximately $393,000, which included a local contribution of $50,000. The unique part of Beloit's local contribution is that the local match was mainly in the form of labor and materials!

Work on the fire station was completed in June 2000 and an Open House was held on July 6, 2000. Throughout 1999, City crews, especially the Transportation Department, assisted the Fire Department in constructing the new fire station facility by contributing man-hours and machine hours. Volunteer firefighters also contributed substantial amounts, including many nights and weekends, of time and energy to assist in the completion of the fire station.

The fire station is a building in which the entire city can be proud. It will serve the needs of the citizens of Beloit for many years to come.