The Mitchell County Courthouse was completed in 1901 at a cost of $38,310. It was called the Queen Mary of Courthouses in Kansas, being built of pitch-faced limestone in the Richardsonian Romanesque design.

In 1904, the Seth Thomas four-faced clock was installed in the Courthouse tower and was paid for by donations. Originally, it was wound by hand once a week, a task that took 45 minutes to accomplish. It was converted to electricity in 1950.

The building contains 25 rooms on three floors. In the halls, the original stone floor tiles, decorative metal ceiling and early embossed wall coverings are visible. The original ornate fireplaces can be seen in several offices. 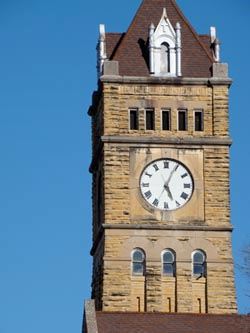 The Courthouse was listed on the National Register of Historical Places on November 23, 1977.