St. John's Church is evidence of the pioneer spirit and determination of the many ethnic groups that built this country. Visitors are amazed to find such "Old World" architecture and art in the heart of Kansas.

Until the 12th century, large buildings in Europe were of the Romanesque style, featuring round windows and thick walls that supported the weight of the stone. The French made use of the Gothic style, which was characterized by pointed arches and thinner walls supported by piers and buttresses bracing the outer walls. Arched stone ceilings were supported by ribs leading down to pillars. The pillars and clerestory walls were braced outside by arched or flying buttresses. St. John's is a combination of the Romanesque and Gothic styles of architecture. 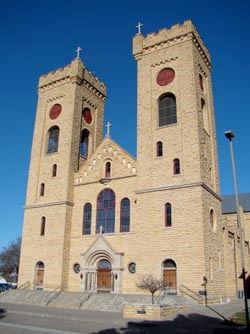 When Msgr. Michael Heitz came to Beloit in 1898, he found a small stone church with bulging walls held together by a steel rod. In 1899 he decided to build a new church, and he secured the well known architect Joseph Marshall of Topeka, Kansas, to draw the plans.

For two years, farmers quarried and hauled limestone to the church site. From professional stonemasons, Msgr. Heitz learned to dress stone himself so he could instruct parishioners who contributed their help.

Foundation work began in the fall of 1900, and the cornerstone laying and blessing by Bishop Cunningham was on June 4, 1901.

Completed in 1904, the church was built around the old church in the form of a Latin Cross. It measures 150 feet long and 74 feet wide at the front (south entrance).

The nave (middle body) is 61 feet long and 66 feet wide. The transept (forming the arms of the cross) is 87 feet long and 34 feet deep. The church walls have a thickness of 24 inches. The towers are 22 by 22 feet. Original plans were for the towers to rise to a height of 112 feet, but because it was decided that the extra height would add too much weight, the towers are only 100 feet tall, 108 feet including the crosses adorning each tower. As work progressed around it, the old church was torn down in March, 1901. The stone was used for the arched nave ceiling which reaches a height of 40 feet.

Msgr. Heitz said St. John's was the first church in the USA built with flying buttresses and a ceiling entirely made of stone. It was at the time the largest church west of the Mississippi River.

The post rock church is trimmed with Indiana limestone. At the arched main entrance are six granite pillars in three colors bracing the high arched ceiling. The granite shafts are topped with sculptured capitals, each a bit different. These pillars form an arcade on either side of the nave. The pillars were so heavy that they were left on the railroad flat cars until there was a good snow. Sleds were built to bring them, one at a time, to the church site by horse power.

There are 29 colored windows in the entire church. Those above the central entrance and in the lower portion of the larger windows are stained glass. The others are of a special process of painting. These beautiful windows depict various saints, biblical characters and scenes. Especially striking are the windows of the east and west transept and the window of St. John the Baptist over the high altar and the Ascension scene in the choir loft.

The stations of the cross are cast in plaster in a type of raised figure known as "bas-relief". These are beautifully and realistically designed.

African marble trim was installed in 1906. It is a duplicate of an altar which the French erected in a church in Rome to honor Pope Leo XIII. Msgr. Heitz brought a picture of this altar back from a visit to Rome. This is now called the altar of repose, where the tabernacle containing the Holy Eucharist is kept. The new Mass altar, side altars, lecterns, and Communion stations are also of imported Carrara marble.

Two delicately carved Carrara marble statues , one of St. Joseph, patron of the Universal Church, and a second of Mother Cabrini, Patroness of the Missions, enhance the sanctuary area.

With the parish out of debt, Msgr. Heitz decided to complete his "dream church" with fresco paintings, a form of painting applied directly to wet plaster rather than to canvas. Msgr. Heitz knew of an outstanding church artist from New York, Gonippo Raggi, who had decorated churches in the dioceses of New York and Boston. Monsignor wrote to him, describing what he desired for decorating the sanctuary. Raggi sent sketches which Monsignor called "a delight to look at".

Gonippo Raggi, the favorite pupil of the Master of the Academy of Santa Lucia, Rome, won first place from among 200 contestants and 10,000 lira for designs for St. Cecilia Across the Tiber in Rome. When his Master died before finishing the painting of that church, Raggi was chosen to complete the work. His selection was quite an honor in a city of artists.

Gonippo Raggi was assisted by his brother, Palamedo. By Easter 1913, he finished the sanctuary paintings which represented the "Birth of St. John the Baptist", "His Trial before Herod", and finally "His head on a Tray Being Presented to Salome". The brothers came back in June to do the transept paintings.

In 1923, the brothers returned to paint the remainder of the church walls and designs, some of which have been covered up with subsequent remodeling. At this time, as his gift Gonippo brought his two huge canvas paintings, which now grace the south walls of the church.

The organ was purchased from the Estey Organ Co., and the dedication organ recital was October 28, 1921. The organ has 749 pipes, some of wood and some metal. A blower sends air across the pipes, and notes are produced by controlling the amount of air sent over and through the pipes. It was restored by Vaughn Organ Co. of Holdrege, NE, in 1980.

The man whose vision and leadership had inspired the creation of this marvelous church was Msgr. Heitz. He proved to a parish of mostly German and Irish descendants that united effort could produce what they first thought impossible.

He was born March, 1856, in Oswald, Alsace-Lorraine, France and did his seminary studies at Strasbourg and was ordained August 10, 1879. He served there at St. Louis parish until 1888 and received a scholarship to Rome where he obtained his Doctorate of Theology.

In order that everyone might enjoy the "new look", the Catholic Daughters conducted a tour of the church on September 26, 1969. A second tour of the church was during the Bicentennial Year, on September 26, 1976. Historic facts on architecture, altar, and paintings were compiled by Helen Louise Ross from letters sent to Elizabeth Lutz Franzmathes from Msgr. Michael Heitz.

St. John's Catholic Church was placed on the National Register of Historic Places on April 14, 1975, by Congressman Keith Siebelius. This registration was achieved through the efforts by Helen Louise Ross, Louise Matheis and Rev. Henry Kieffer, who performed research and established required facts and references.

Information collected by Helen Louise Ross and from Our Church: A Mighty Fortress, which was edited and compiled by Rev. Msgr. John A. Duskie. - Catholic Daughters of the Americas Court 1150